When you think of Christmas, you may not think of a mid 1980s classic slasher flick, but that’s exactly what the first post of Mintmas will be. #morbid. Last year, Kat from Kitsch Snitch recommended I watch Silent Night Deadly Night, and I absolutely loved it! Thanks Kat! This MMM (Mintmas Macabre Monday) is for you :*

When a young boy witnesses the violent death of his parents on Christmas Eve, by a man dressed in a Santa suit, you can only imagine how traumatised he would be. The boy, Billy, grew up in a strict Catholic Orphanage, where punishment for naughty children gave him a twisted set of moral standards. After ten years, he is just as twisted, and unfortunately has an incident that pushes him over the edge. Billy decides to ‘punish’ all those who are on Santa’s naughty list. Dressed as Santa, of course, and wielding an axe. His time at this Catholic orphanage teaches him that sex is bad (m’kay), and is deserving of the utmost harshest punishment. 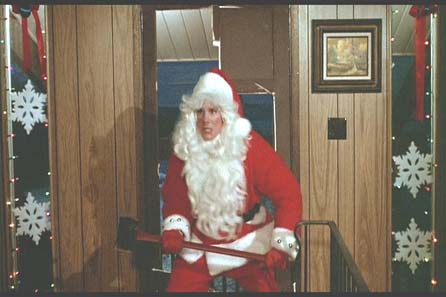 If you love the slasher genre, and you’re in the mood for lulz, get your hands on Silent Night Deadly Night.

Check out #mintmas on all social media to get up to date!