I thought this week might be high time for me to come clean on something. YUP I am scared of dolls. Not so much Cabbage Patch Dolls and other lovely dolls that my niece plays with. But more antique dolls/scary dolls that have been possessed/ventriloquism dolls. I thought I would share some of my favourite doll movies, books and stories with you today!

Probably the most well-known ‘scary doll‚Äô is Chucky. A popular movie franchise which originally started in 1988, which has spawned many a sequel, the most recent of which being released in 2014. Charles Lee Ray (also known as the Lakeshore Strangler) is a serial killer on the run. While attempting to escape police, and knowing that he is bleeding to death, he transfers his soul into a “Good Guy” doll in a toy store. Havoc proceeds.

Anyone remember this book from the 90s?

One of the first dolls I was scared of was Slappy in the Night of the Living Dummy Series in Goosebumps books and TV shows, written by R.L. Stine. A raspy voiced dummy that comes to life and tries to enslave the owner of the doll. He also particularly enjoys pulling pranks and framing the protagonist of the book or show. Although this doll is not particularly scary to me now, it was the cornerstone of my fear of dolls.

One of the more recent spooky doll films is Dead Silence, starring Australian actor Ryan Kwanten (True Blood) as the main protagonist. After Jamie‚Äôs (Kwanten) wife suffers a horrific death in their apartment, he returns to their home town of Raven‚Äôs Fair to search for answers. The tagline of the movie ‘Every town has it‚Äôs own ghost story‚Äô eludes to a local folktale about a ventriloquist named Mary Shaw. After she went mad in the 1940s, she was accused of kidnapping a young boy who heckled her during one of her performances that she was a fraud.

Because of this she was hunted down by townspeople who in the ultimate act of revenge, cut out her tongue and then killed her. They buried her along with her “children,” a handmade collection of vaudeville dolls, and assumed they had silenced her forever.

Of course, since Mary‚Äôs death there has been a bunch of mysterious deaths around the town that they have been turning a blind eye too. And when Jamie turns up, it shakes the town‚Äôs activity up even more. 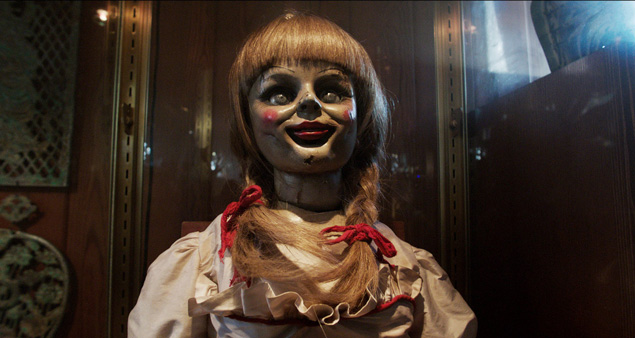 The Conjuring‚Äôs take on Annabelle

This is a bit of a long story, so I apologise for the wall of text.¬ÝOne of the more recent films to feature a doll had only a small part, but it really struck a chord with me and has remained at the forefront of my mind. Maybe because it is true. In the film, Annabelle is a grotesque looking antiqued doll, but in real life, she is just a plain, old, run of the mill Raggedy Ann doll.

Donna, a nursing student, received Annabelle from her mother in 1970. Her mum had purchased the used doll at a hobby store. Donna was living with a roommate named Angie at the time, and at first neither thought the doll was anything special. But over time they noticed Annabelle seemed to move on her own; at first it was really subtle, just changes in position, the kinds of things that could be written off as the doll being jostled. But the movement increased, and within a few weeks it seemed to become fully mobile. The girls would leave the apartment with Annabelle on Donna‚Äôs bed and return home to find it on the couch.

Donna began to find pieces of parchment paper in the house with messages written on it. “Help us,” they would say, or “Help Lou.” Just to make the whole thing that much creepier nobody in the house had parchment paper. Where the hell was it coming from?

The escalation continued. One night Donna returned home to find Annabelle in her bed, with blood on her hands. The blood - or some sort of red liquid - seemed to be coming from the doll itself. That was enough; Donna finally agreed to bring in a medium. The psychic sat with the doll and told the girls that long before their apartment complex had been built there had been a field on that property. A seven year old girl named Annabelle Higgins had been found dead in that field. Her spirit remained, and when the doll came into the house the girl latched on to it. She found Donna and Angie to be trustworthy. She just wanted to stay with them. She wanted to be safe with them.

Being sweet, nurturing types, Donna and Angie agreed to let Annabelle stay with them. And that‚Äôs when all hell broke loose.

Lou, a male friend of the girls who often stayed over, started having bad dreams, dreams where Annabelle was in his bed, climbing up his leg as he lay frozen, sliding up his chest to his neck and closing her stuffed hands around his throat, choking him out. He would wake up terrified, head pounding like all blood had been cut off to his brain.

A few days later Lou and Angie were hanging out, planning a road trip, when they heard someone moving around in Donna‚Äôs room. They froze - was it a break in? Was there an intruder in the apartment? Lou crept over to the door, listening to rustling within. He threw open the door and everything was as it should be - except Annabelle was off the bed and sitting in a corner. As he approached the doll, Lou was consumed with that feeling, a burning on the back of the neck that indicates someone was staring at you and he spun around. Nobody was there. The room was empty. And then sudden pain on his chest. He looked in his shirt and saw a series of raking claw marks, rough ditches in his flesh that burned. He knew Annabelle had done it.

The weird claw marks began healing almost immediately. They were totally gone in two days. They were like no wounds any of them had ever seen before. They knew they needed more help, and they turned to an Episcopalian priest, who in turned called in Ed and Lorraine Warren (the two demonologists from The Conjuring).

Lorraine Warren with the real Annabelle

It didn‚Äôt take the Warrens long to come to their conclusion: there was no ghost in this case. There was an inhuman spirit - a demon - attached to the doll. But they warned that the doll wasn‚Äôt possessed; demons don‚Äôt possess things, only people. It was clinging to the doll, manipulating it, in order to give the impression of a haunting. The target was really Donna‚Äôs soul.¬Ý

A priest performed an exorcism on the apartment and the Warrens took possession of the doll. They put it in a bag and began the long drive home; Ed agreed to stay off the highways because there was a concern that the demon might mess with the car. Sure enough, as they drove on the back roads, the engine kept cutting out, the power steering kept failing and even the brakes gave them trouble. Ed opened the bag, sprinkled the doll with holy water and the disturbances stopped… for the moment.

Ed left the doll next to his desk; it began levitating. That happened a couple of times and then it seemed to just quit, finally laying quiet. But in a couple of weeks Annabelle was back to her old tricks; she started appearing in different rooms in the Warren home. Sensing that the doll was ramping back up the Warrens called in a Catholic priest to exorcise Annabelle. The priest didn‚Äôt take it seriously, telling Annabelle “You‚Äôre just a doll. You can‚Äôt hurt anyone!” Big mistake: on his way home the priest‚Äôs brakes failed, and his car was totaled in a horrible accident. He survived. 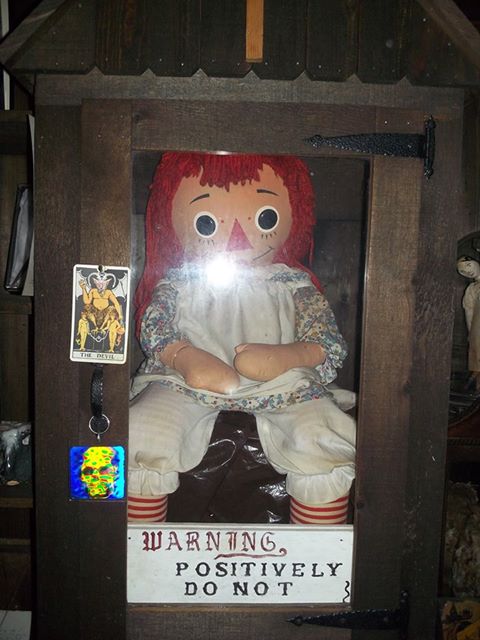 Eventually the Warrens built a locked case for Annabelle, and she resides there to this day. The locked case seems to have kept the doll from moving around, but it seems like that whatever terrible entity is attached to it is still there, waiting. Biding its time. Ready for the day when it can again be free.

I hope you enjoyed this Monday‚Äôs creepiness!