Another Macabre Monday is upon us, and today’s topic is torture devices. Although today’s topic will be about devices used in the Middle Ages, torture is still used today by America’s Central Intelligence Agency, with the last use of water boarding in just 2003! Here are the Top 5 most horrific torture devices that I’ve ever seen!

Yet again, just a quick disclaimer that this post will not be for everyone, and may be graphic or be upsetting to readers. Take care before clicking Read More!

More of a ‘technique’ than a device, but I couldn’t leave it out. This is sometimes also called the Cheshire Grin, which makes me less enthused about Alice in Wonderland! The smile is caused by cutting two small cuts at either side of the victim’s mouth, and then the torturers proceed to punch or beat the victim to cause them to scream. By screaming, they end up tearing either side of their mouth into a terrifying ‘smile’.

It really reminds me of Heath Ledger’s Joker from The Dark Knight, and I have to wonder if this happened to his character despite his numerous stories of ‘how he got these scars’.

4. The Choke Pear or The Pear of Anguish

The Pear was a metal device, usually in the shape of a pear, that was divided into segments that could be spread apart by turning a screw. The pear was inserted into the victim’s mouth, simply as a gag, or to torture them. The tortured ones would have their jaw slowly broken, which would swell the airways and suffocate the victim. 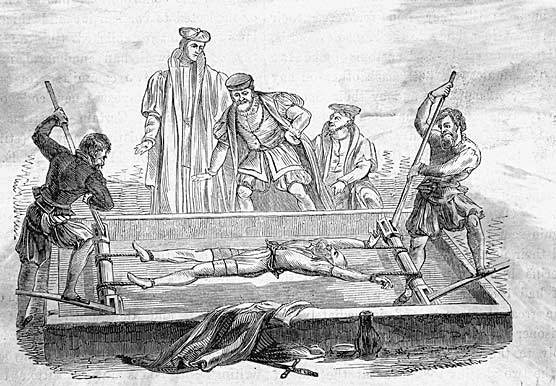 Probably one of the most well-known torture devices, the rack was rectangular wooden from, with rollers on each end. It was used in interrogation to stretch the victims from their ankles and wrists. For many years, scientists believed that the rack would snap tendons and stretch the skin, but in recent studies, they found that it could actually snap bone before it snapped a tendon, due to the slower increasing of the stretching.

You may have previously heard of Vlad Dracula (whom Bram Stoker’s Count Dracula was based off) or his more infamous name Vlad the Impaler of Romania. He was imprisoned as a child in a Turkish prison, and during this time he suffered terrible torture and failed to develop any sympathy, empathy or conscious. During his ruling, he enjoyed killing over ten thousand of his enemies via impalement. 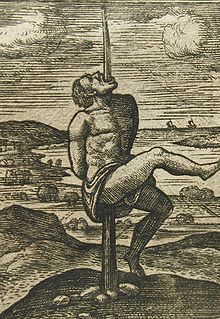 He used this method not only to satiate his blood lust, but to also warn enemy armies by displaying his the impaled victims in the fields and forests surrounding his castle. There weren’t too many running to sell him steak knives, or ask if he would like to live in Paradise!

Impalement, the method of execution that gave Vlad his name, is an extraordinarily painful way to die. To ensure maximum pain when he impaled his victims, he rounded the ends of spikes and oiled them to reduce tearing. The spikes were introduced into the victim’s anus and pushed in until the other end emerged from the victim’s mouth. The impaled victim was then hoisted vertically, and left to writhe in agony, sometimes for days. 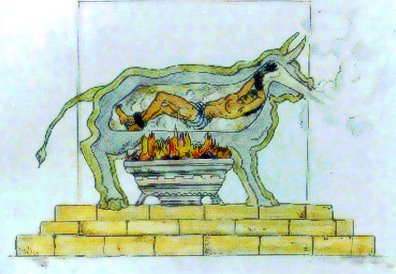 I had not heard of this particular torture device until I did some digging. It’s one of the most horrific devices ever made in my opinion, and I am surprised I hadn’t heard of it earlier! Possibly because there was only one in existence, and it was destroyed after the owner ceased his reign of terror.

The Bronze Bull was designed in Ancient Greece (about the 6th Century) by a metal-worker named Perillos of Athens, who then proposed his crafted device to Phalaris, the tyrant of Akragas, Sicily, as a new means of executing criminals by being roasted alive inside the bull, which would be positioned over a fire pit.

Phalaris commanded that the bull be designed in such a way that its smoke rise in spicy clouds of incense. The head of the bull was designed with a complex system of tubes and stops so that the prisoner’s screams were converted into sounds like the bellowing of an infuriated bull while they were being slowly roasted and running out of oxygen.

Phalaris ordered its horn sound system to be tested on Perillos himself. When Perillos entered, he was immediately locked in, and the fire was set, so that Phalaris could hear the sound of his screams.

What are your favourite creepy topics? Let me know and I can probably do some requests!